We added three more checkmarks to the list by skiing Columbia Point on Sunday, and with it wrapped up an incredibly successful Centennial Skiers road trip.

From California Peak we sailed the Spyder land yacht north to Westcliffe, where we moored at the Grape Creek RV Park for the night. Five of us drove up the South Colony Lakes Road early the next morning and began the long approach to the summit– via South Colony Lakes and the Bears Playground. 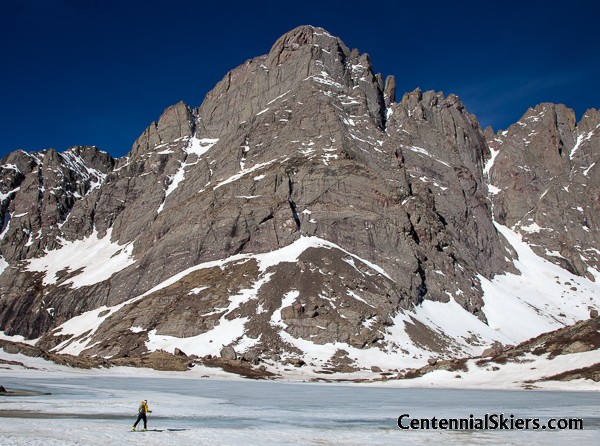 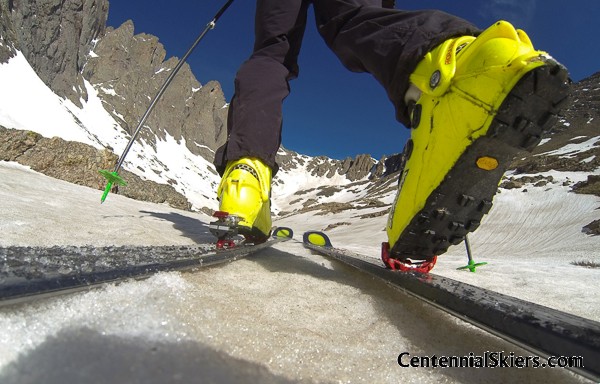 Skinning up towards the couloirs below Bears Playground. 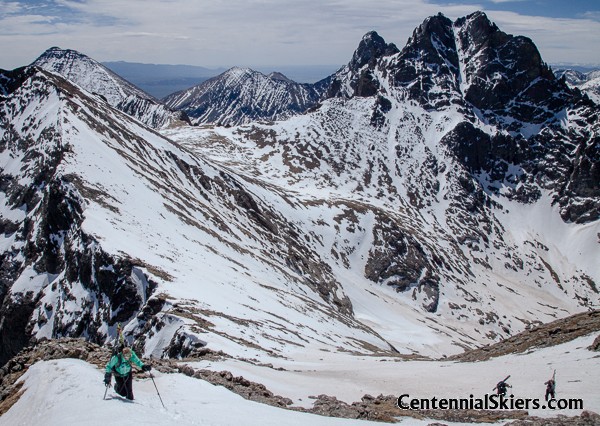 Climbing towards Columbia’s summit. The North Couloir of Crestone Peak can be seen out to the right.

Columbia Point, a sub-summit of Kit Carson Peak, 14,165 ft., and part of the impressive Kit Carson Mountain was named as such in 2003 to honor the astronauts who perished in the Shuttle Columbia explosion that same year. Interestingly, the peak is actually comprised of two summits, connected by a ridge, both of which measure in (on a 40-foot contour map) at an interpolated 13,980 feet. Because skiing is our goal and since both summits are technically the same elevation, we chose to ski the most aesthetic route offered by the two sub-summits– an east-facing slope with a true fall-line that drops right off the eastern summit.

Kit Carson Mountain, as seen from Cailfornia Peak, is comprised of three named peaks. Challenger Point (left), Kit Carson Peak (center), and the two summits of Columbia Point (right). We skied the snow to the right of the eastern (rightmost) summit. 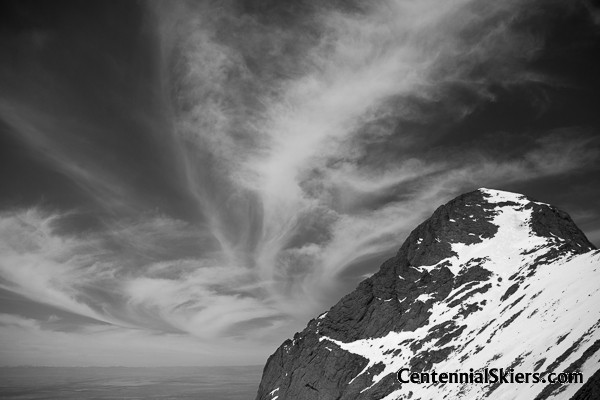 The ski line falls right from the eastern summit. 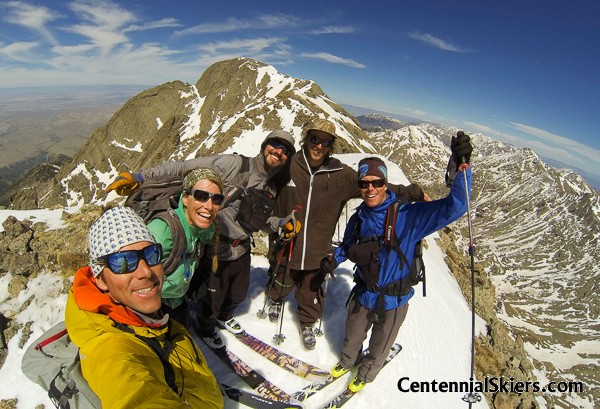 On the summit, Kit Carson Peak is behind.

And the skiing was great, made even better by the incredible backdrop provided by the Crestone Peak and Needle. In fact, the whole 14-mile roundtrip seemed less arduous thanks to the scenery, and the descent from Bears Playground provided some of the best couloir skiing of the spring. 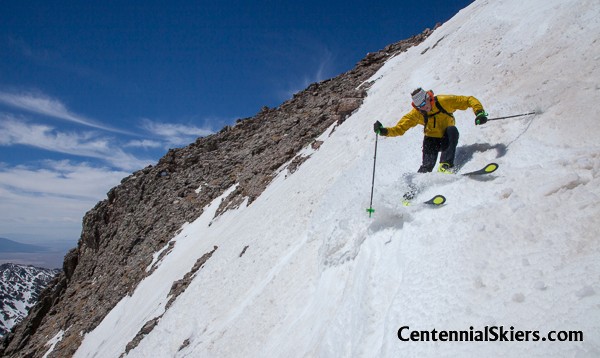 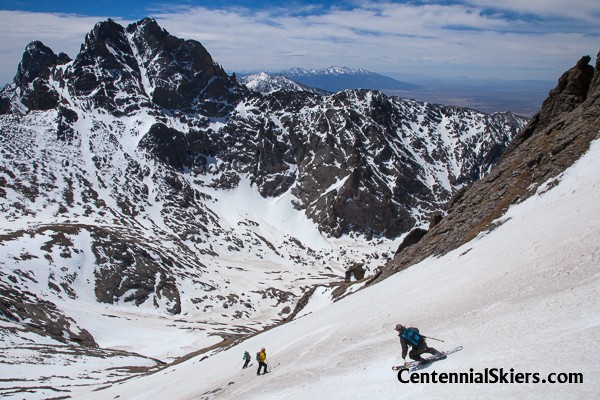 Coverage was pretty good for late May this year. 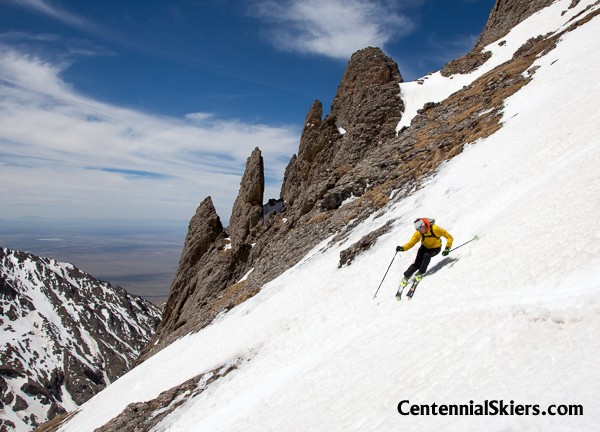 Conglomerate gendarmes define the Kit Carson massif and the Crestones. 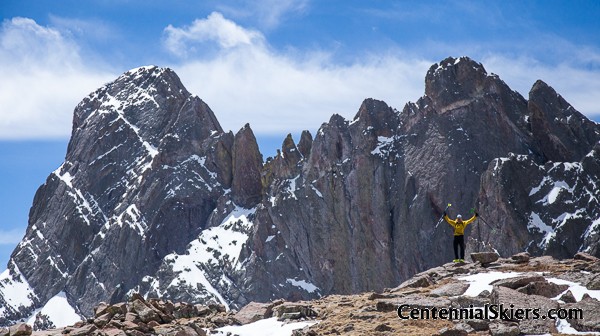 At the top of the couloirs. The Crestone Needle is to the left.

While the three of us are still planning on trying for a few more select snowy summits, the RV road trip chapter of 2013 has come to an end. It was a good run. Over the past 14 days Dav and I skied 14 summits on our list (Christy missed three due to work), plus one 14er. Prior to that, Dav netted another eleven summits (and Mount Edwards today), bringing his spring season total to an astounding 26 ski descents. Christy and I collected another five descents ourselves earlier this spring, which when you consider the rocky start (pun) of the 2012/13 ski season, is a really good set of results.

When added to the varying number of descents we each had before we started this project in earnest, the total summits skied of the list of 100 Centennials by the group are: Dav- 81, Christy- 80, Ted-84

I’d say that’s pretty good. If we can get just a couple more this week or next (or even if we can’t), we’ll be in a fairly good position to potentially wrap it all up by the end of next spring. 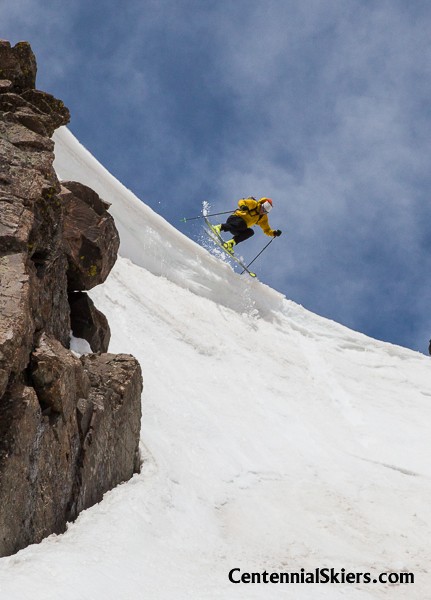 Dropping into the couloir. 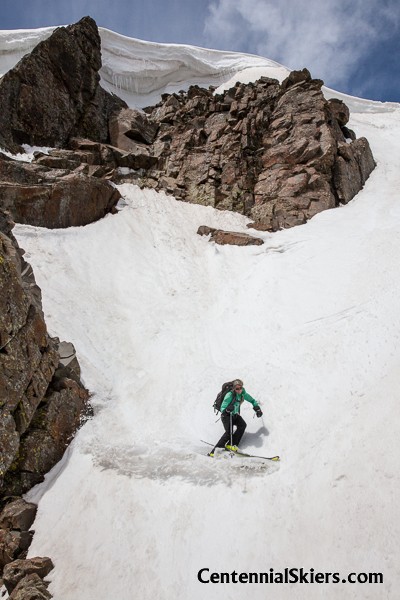 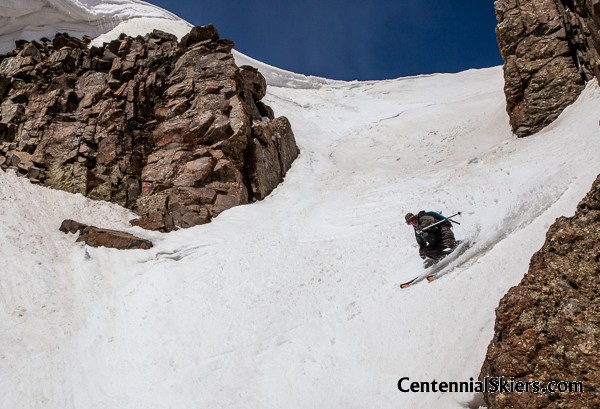 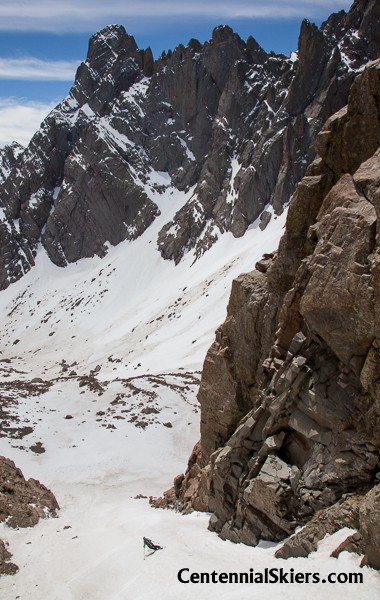 The scenery here is insane.

It was the best couloir skiing we’ve found through the past two weeks. 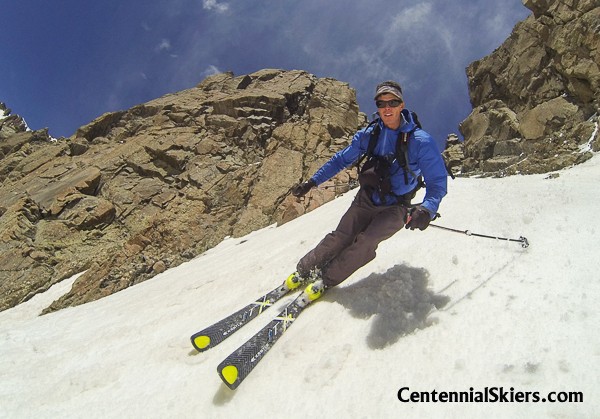 Out of the couloir and heading down to the South Colony Lakes. 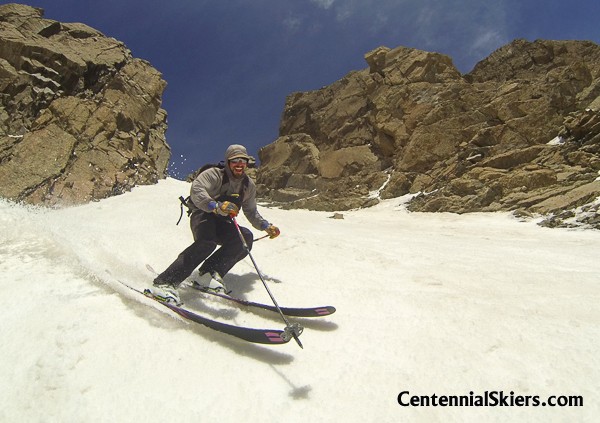 Scott, clearly psyched to be here.