We skied Gladstone Peak on Thursday, our fourth peak in as many days, via Sunshine Mesa and Bilk Basin. Apart from the grunt work required to climb into and ski out of Bilk Basin (steep, punchy snow with willows and deadfall), the day was pretty cool. Once up in the basin, the route up Gladstone, with the Lizard Head Spire backdrop, was really fun.

Dav and Christy make their way up Bilk Basin towards the base of Gladstone’s North Face. The back of Wilson Peak, a Telluride ski test-piece, is behind.

We’ve mentioned before being concerned with the dust and resulting rapid melt of snow in this part of the state. After two summits in the Telluride area we’ve observed that while the dust is substantial, and the snow has melted quite a lot for this time of spring, the conditions up high have been surprisingly good.

The route of ascent and descent on the mountain’s north side. We managed to skin a good way up the face before switching to crampons for the finish stretch up the ridge.

And as far as Gladstone as a Colorado summit goes, I thought I’d let Dav share some thoughts he had recorded while on the climb:

As we approached the base of the North Face of Gladstone, and I took stock of our surroundings, I had a momentary burst of poetic energy course through me. Here what came out of my vertical-addled brain:

“Imagine your the youngest of four siblings, and your three older brothers or sisters are big and famous, popular to the point of being featured in books and having their photo taken every season. You on the other hand are proud yet quiet, staying out of the spotlight and sitting silently, rarely visited and rarely talked about. Such is the case with Gladstone Peak, the somewhat ugly stepchild of the Wilson Group. Gladstone is a beautiful peak with fantastic ski potential, yet it sits there between the giants– Mount Wilson, El Diente Peak, and Wilson Peak– so it’s overlooked and rarely skied. Certain guidebook authors have even gone so far as to call her ‘Sadstone’. As we stood on the summit of Gladstone I was proud to give her some of the attention she deserves, for she’s a real gem.”

Christy and the poet, clearly happy to be here.

Initially we had planned to give Dallas Peak a go today, but after catching views of sparse snow cover on the technical summit from both Teakettle and Gladstone, and since we were feeling pretty tired from all the alpine starts this week, we didn’t ski today. Next up is a move south to Silverton to try for a couple of summits there– Vermillion and Jones– after which we will wrap up our San Juan chapter for the season.

There’s more snow in the other ranges, so we’ll be heading there next week.

Thanks for reading,
–Ted

Dav, off the summit. Sunshine Mountain and the valley we ascended can be seen. (Matt Lanning photo) 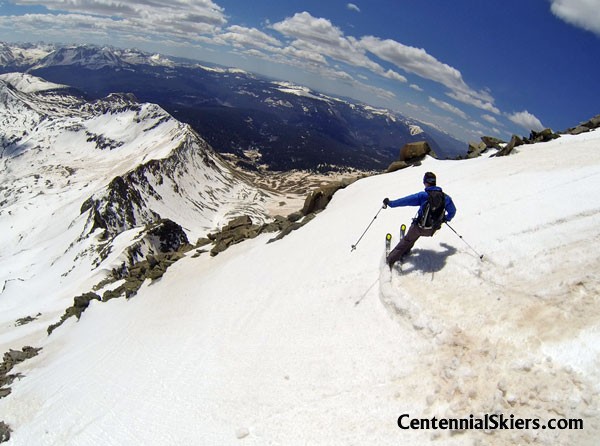 Ski cutting the spring snow. Our route began down the mountain’s east side, and then dropped off to the north face further down. 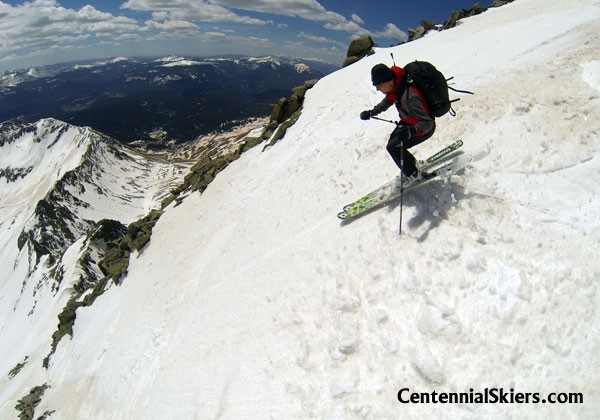 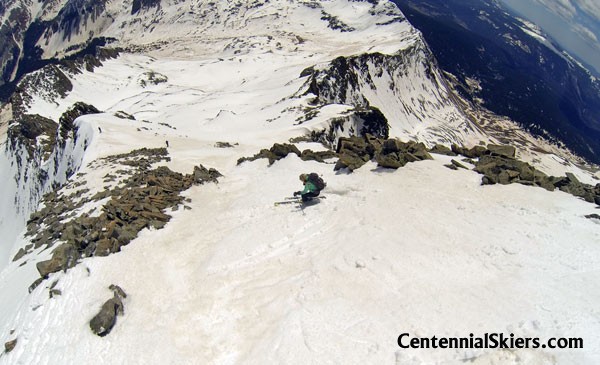 Christy, further down. The complete east side route can be seen below her, as well as Matt and I down on the ridge to the left, where the north face skiing began.

Parting shot- moving through a picturesque stretch of snow, sculpted by water and the spring melt process.